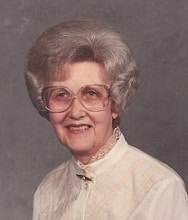 Adelle Terrell Bearden died peacefully on Wednesday Morning January 9, 2013. Adelle was born in Little Rock Arkansas on June 12. 1917 and was the daughter of the late James M. and Nora B. Terrell. She was preceded in death by her adoring husband Daniel J Bearden.

She is survived by a son Lawrence J Bearden and his wife Olivia Bearden of Davidson, NC: a Granddaughter Dr. Elizabeth B Bearden and husband Michael Harrison of Madison, Wisconsin; a sister Thelma T Duggan and niece Adelle Laws and husband Bill Laws of Sacramento CA.; a Nephew Don Terrell and Family of Jamesville Wisconsin, son of the late Claude Terrell, her brother.

Adelle was a resident of Little Rock, Arkansas for many years, a graduate of Joe T Robinson HS, and attended Cornell University for a year, later in life. Her career began at Timex Corporation as a production worker. She became involved in the Local 921 union and in the Arkansas Labor Council spending numerous volunteer hours in the Women’s Activity Department. She became a Delegate to Grand Lodge Conventions of the Arkansas State AFL-CIO and was a delegate to the Democratic National Convention.

She was appointed by the International Union as a Special Grand Lodge Representative and began working with local and district organizations in the South East US that were involved in natural disasters. She was the first woman to achieve the position of National Grand Lodge Member in the AFL-CIO in the country, leading the way for women to receive high positions of leadership in the organization in future years. She was often considered to the “First Lady of Labor” in Arkansas. After retirement she moved to Winston Salem to be close to her family. She joined Ardmore Methodist Church and served for many years in Deborah Circle and became involved in various activities of community service in Winston Salem.

She cherished her family extending love every day and was surrounded with wonderful friends. Throughout her life she retained a deep and quite faith in God. She loved gardening, tending flowers and extended nurturing comfort to all that came to her door. She lived her life with a quiet demeanor and compassion, believing in the good in everyone. Always committed for what was right, doing so with integrity and an honest commitment to those she represented and loved. She was a wonderful friend, Mother and Grandmother. Will miss her wisdom, warmth and enduring care.

In lieu of Flowers, Memorials may be made to: Guiding Eyes for the Blind: 611 Granite Springs Rd, Yorktown Heights, NY 10598.

An informal reception in her memory, will be held at Ardmore United Methodist Church, Fellowship Hall, 630 Hawthorne Ave, W-S NC on Sunday the 20th of Jan from 11:30 AM till 1:00 PM.

Carolina Cremation of Salisbury, North Carolina is assisting the Bearden family. Online condolences may be made at www.carolinacremation.com.