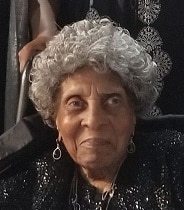 Florine was born August 13, 1925 to the late Ollie and Nathaniel Wilson and was raised in Danville, Virginia. She moved to Englewood, NJ in 1953 then to Salisbury, NC in 2016.

She was a hard worker providing for her family. She was truly loved and will be missed not only by her family but by all who knew her.

Carolina Cremation is assisting the Lea family. Online condolences may be made at www.carolinacremation.com.