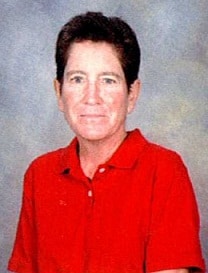 Francee Leigh Eagle Barber, 54, of Salisbury, died Monday, May 14, 2012 at Rowan Regional Medical Center. Born Feb. 15, 1958 in Rowan County, she was the daughter of John Francis and Loretta Kluttz Eagle of Salisbury.

She was a member of the 1976 graduating class of Salisbury High School. While attending there, she played tennis and softball and was Rowan County player of the year in 1976. She graduated from Appalachian State University in 1980 with a BA in physical education. As an outstanding tennis player, she was the number one player on her team each of the four years she attended ASU and during her last year there she was the first woman to ever receive a partial scholarship for tennis.

Mrs. Barber worked as a PE teacher for the Rowan-Salisbury school system for 18 years and also taught tennis at the Salisbury Recreation Center. She was a member of Trinity Lutheran Church in Landis, NC.

Mrs. Barber was preceded in death by her brother, John Jeffrey Eagle.

Survivors, in addition to her parents, are her sister-in-law, Shellie Eagle Stubbs (Rob) and a niece, Karlee Lynn Eagle, all of Salisbury. She is also survived by an aunt, Betty Kluttz Miller of Hickory, NC and several cousins who are Billie Jean Miller, Rae Eagle, Kim Eagle Howard, David, Lisa and John.

Memorial service will be held on Thursday, May 17th at 11am at Union Lutheran Church by Pastor David Nuottila and Pastor Jarrod Lanning of Trinity Lutheran Church. The family will receive friends at the home of Shellie Eagle and Rob Stubbs located at 4030 Fish Pond Road Salisbury, NC 28146 immediately following the service.

In lieu of flowers, please make memorials to the Playground Fund at Union Lutheran Church 4770 Bringle Ferry Road, Salisbury, NC 28146. This playground has been dedicated in memory of Francee’s brother, Jeff, who died of cancer in 2004.

Carolina Cremation of Salisbury, NC is assisting the Barber family. Online condolences may be made at www.mycarolinacremation.com.