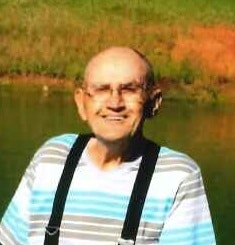 “Chop” Hugh Zack Jordan, 82 of China Grove passed away on Monday November 3, 2014 at CMC-Northeast surrounded by family. Mr. Jordan was born on August 29, 1932 in Chesterfield SC, to the late Henry Jordan and Allie Outen Jordan.

Hugh worked for Cannon Mills Plant #1 as a Heavy Machinery Operator until he retired in 1994. He loved watching Nascar, fishing, playing golf, and was an avid bowler. Most of all, he enjoyed spending time with his family at home and his dog Penny who went everywhere that he went no matter what.

In addition to his parents, he is preceded in death by several siblings.

A Memorial Service will be held at Memorial Baptist Church (1785 Dale Earnhardt Blvd., Kannapolis, NC) on Friday November 7, 2014 at 6:00 PM conducted by Pastor Tim E. McQueen and Rev. Ron Hartman. The family will receive friends following the service at the church.

Carolina Cremation of Salisbury and Charlotte is assisting the Jordan family. Online condolences may be made at www.carolinacremation.com.