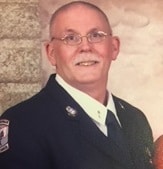 Mark Wayne Williams, 62, of Granite Quarry passed away at his residence on Saturday, October 17, 2015, surrounded by his family. Mark was born on December 11, 1952 in Norfolk, Virginia son of the late James Redford Williams and Julia Story Williams.

A graduate of NC State University with a Criminal Justice Degree, Mark was a Police Officer in Raleigh and Cary and was a Veteran having served in the Marines. He was a member of Faith Baptist Church.

Service: Visitation will be held at Faith Baptist Church from 1:00 to 2:00 PM Saturday, October 24, 2015. The memorial service will follow at 2:00 Pm conducted by Rev. Tim Barnett, pastor.

In lieu of flowers memorials may be made to Rowan Hospice and Palliative Care, 720 Grove Street, Salisbury, NC 28144.

Carolina Cremation of Salisbury and Charlotte is assisting the Williams Family. Online condolences may be made at www.carolinacremation.com.