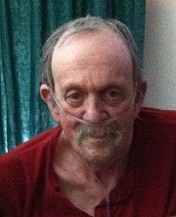 Raymond Lugue Cyr, 71, of Fayetteville, NC passed away on Monday, August 12, 2013 at the Glenn A. Kiser Hospice House. Mr. Cyr was born on December 8, 1941 in Frenchville, Maine to the late Damase and Irene (Raymond) Cyr.

Raymond worked at Cly Del Manufacturing in CT., and worked in construction as a tile setter and loved woodworking as well. He was addicted to any Do It Yourself television shows as well as the Antique Roadshow and This Old House. Most of all, however, he loved spending time with his grandchildren and teaching anyone, who wanted to learn, how to fix things.

In addition to his parents, he is preceded in death by his wife, Dorothy (Bradshaw) Cyr, Geneva “Jackie” Ragan, and a brother, Ernest Bessett.

A memorial service is being held for Raymond, September 14, 2013 from 1p.m. to 4 p.m. at the American Legion Hall in Faith North Carolina.

Carolina Cremation of Salisbury, North Carolina is assisting the Cyr family. Online condolences may be made at www.carolinacremation.com.