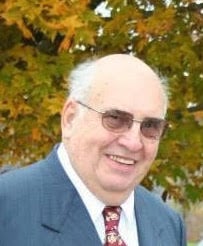 Robert Myron Westfall 86, of Salisbury formerly of Clinton Township, MI passed away peacefully surrounded by family on Wednesday, October 21, 2015 at Novant Health Rowan Medical Center. Robert was born on May 15, 1929 in Detroit, MI, son of the late Myron and Anna Marshall Westfall.

Robert was educated in the Detroit area schools, he was a tool and die maker for the auto industry. Robert was a Veteran of the United States Marine Corp, and bravely fought in the battle of the Chosen Reservoir. He was a car enthusiast, with a special eye for the Chevrolet Corvette owning two through the years, as well as an avid hockey fan for the Detroit Red Wings.

In lieu of flowers, memorials in memory of Robert may be made to, Welcome Home Veterans Military Museum, 165 N. Main St., Mooresville NC, 28115.

Carolina Cremation is honored to serve the Westfall family. Online condolences may be made at www.carolinacremation.com.