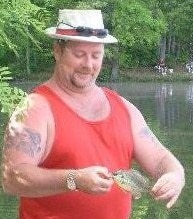 Jay J. Furgeson 44, of Rockwell, passed away unexpectedly at his home on Wednesday January 11, 2012. Jay was born on March 6, 1967 in New York, son of the late Frances and Marlyn Furgeson.

In addition to his parents Jay is preceded in death by sisters, Kitty and Kim Furgeson (Hoover).

Jay was a Foreman for KW Arthur Roofing and Sheet Metal for 14 years. He enjoyed hunting and fishing and having his friends over for cookouts and swimming.

Jay will be greatly missed but NEVER FORGOTTEN.

Carolina Cremation of Salisbury is assisting the Furgeson family. Online condolences may be made at www.mycarolinacremation.com.