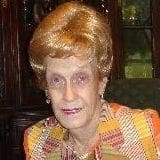 Betty was a active member in the Catawba County Eastern Star and was a member of Grace Reform United Church of Christ in Newton, NC.

A private Memorial Service will be held at a later date.

In lieu of flowers the family would like donations to be made in her memory to Grace Reform United Church of Christ.

The family would like to extend a special thanks to the Conover Nursing and Rehabilitation Center for the excellent care they provided to Ms. Pitts during her recent illness.

Carolina Cremation of Salisbury, North Carolina is assisting the Pitts family. Online condolences may be made at www.carolinacremation.com.