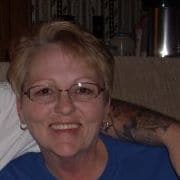 She worked as a acrylic fabricator and in her spare time enjoyed traveling to the beach and mountains. She also enjoyed spending time with family, especially her grandchildren.

In addition to her parents, she is survived by her husband of 38 years, James Frances Engels; one son James Roy Engels and wife Jessica of Kannapolis; two daughters, Robin Johnson Kern of Kannapolis and Tammy Johnson Clouse of Charlotte; one brother, David McDonald and wife Linda of Concord; three sisters, Terry Timberlake and husband Tim of Aurora, Illinois; Paula Johnson and husband Alan of Lenoir; Jayne Anderson and husband Jim of Concord. She is also survived by eight grandchildren, Brittany Helms; Katherine and Brandon Shue; Jacob, Kaylee and Hunter “Porkchop” Engels; Jesse and Josh Austin and also one great grandchild on the way, Destiny.

A Memorial Service will be held at 11am on Saturday, January 31st at Brookdale Baptist Church, 2511 S. Ridge Ave in Kannapolis.

Carolina Cremation of Charlotte, North Carolina is assisting the Engels family. Online condolences may be made at www.carolinacremation.com.