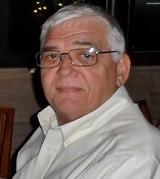 Beloved husband, father, and grandfather. Joseph passed away peacefully at his home on February 23, 2014. After a courageous battle with cancer, he now rests in peace. Joseph was born in Durham, North Carolina and the son of George and Rose Tilghman.

He proudly served his country in the United States Navy during the Vietnam War from 1966-1972. In the Navy, he was in the photo recon squadron. Joseph then worked for The Virginian Pilot for 37 years as a typsetter, page layout, supervising the night composing room then managing the ad support/page design team.

After retiring from there, he started another chapter in his life and began to work for NASA Langley in Hampton, Virginia until him and his wife decided to fully retire in Huntersville, North Carolina. Joe thoroughly enjoyed NASCAR racing, stock car racing, and fishing. His favorite hobby was knife making.

He is survived by his loving wife, Kathleen B. Tilghman of Huntersville; his two sons and their wives, Joseph C. Tilghman and Laurie Tilghman , and Jason C Tilghman and Stacey Tilghman; his daughter and her husband, Allyson M Feder and Jeffrey Feder; and six grand-children, Alex, Brandon, Caitlyn, Isabella, Colton, and Ryan.

His family thanks the caring staff of Hospice and Palliative Care of Lake Norman.

Carolina Cremation of Charlotte and Salisbury, North Carolina are assisting the Tilghman family. Online condolences may be made at www.carolinacremation.com.